Some of the first fortifications to be built by settlers in New France to protect Quebec City from the British army in the 1690s, have been discovered in the heart of Old Quebec.

Archeologists made the discovery mid-October during excavation work that was being carried out by a private building owner on Ste-Ursule Street.

Ten days into the project, the firm supervising the work quickly determined that the wooden beams found in the clay soil were remnants of the fortification built by Josué Dubois Berthelot de Beaucours in 1693-94.

The wood, which normally would have disintegrated over the centuries, was preserved due to the humid environment in which it was buried.

Recently uncovered by excavation work, the wooden stockade was designed to protect the colony from heavy artillery and cannon balls more than three centuries ago. (Richard Lapointe)

Teams are now working to extract the artifacts from the site as quickly as possible before temperatures plummet and jeopardize the site.

Renowned for its stone fortifications that surround the oldest part of Quebec City, the wooden stockade was designed to protect the colony from heavy artillery and cannon balls.

Quebec City Mayor Régis Labeaume, present for the announcement along with Premier François Legault, said the discovery “reinforces our status as a UNESCO World Heritage Site.” 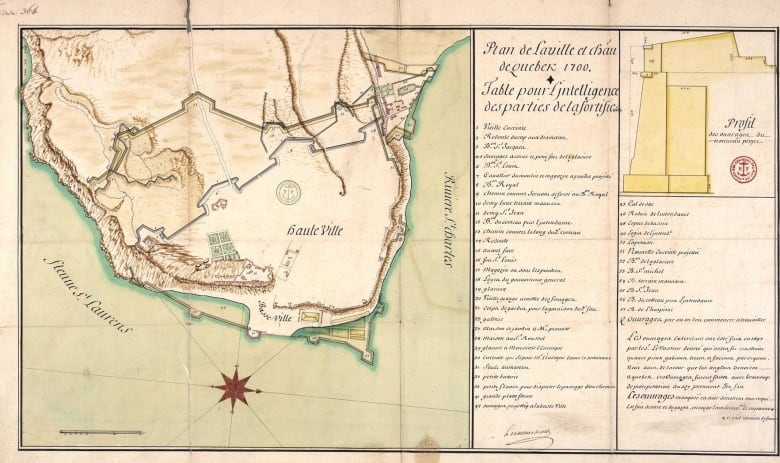 The grey fortification on the map (dating back to 1700) represents the wooden ‘Berthelot de Beausecours’ walls. (provided by the Ministry of Culture)

Legault said he was impressed to see the structure with his own eyes.

“It confirms that our ancestors worked very hard, in very difficult conditions,” he said. “It’s something important, that reminds us we’ve been here for 400 years.”

He said the next discovery he hopes to see is the tomb of Samuel de Champlain, the founder of Quebec City.