The effigies of some of Ukraine’s most prominent politicians that were hung by the neck recently under Kyiv’s Millennium bridge are a stark indication of the ferociousness of the politics here and that public admiration for the victors can be fleeting.

As someone who plays a fictitious president on a TV show — as well as an aspiring presidential candidate in real life —  that reality doesn’t appear lost on Volodymyr Zelensky.

In the latest episode of his wildly popular program Servant of the People, Zelensky’s character — a teacher who took power on a vow to fight corruption and stand up for the little guy — ends up getting thrown in jail by the powerful forces he opposes.

Fans of his show can take comfort both in knowing that his stay in the fictitious TV jail was a relatively short one and also that in the real world, the 41-year-old comic’s political success is no joke.

Ukraine has an interesting cast of contenders running for its upcoming presidential election. None more so than the front-runner, 41-year-old actor/comedian Volodymyr Zelensky. He may have started out as a long shot, but quickly rose to the top on the back of popular discontent with the political class. 2:39

Practically every poll in the final days of the campaign suggests the political novice with zero electoral experience could finish with the most votes in Sunday’s national presidential vote.

“I do believe that Zelensky has high chances,” said Kostyantyn  Fedorenko, a Kyiv-based political analyst with the Centre for Euro-American Co-operation.

“If his voters come out on election day, he is very likely to become president.” 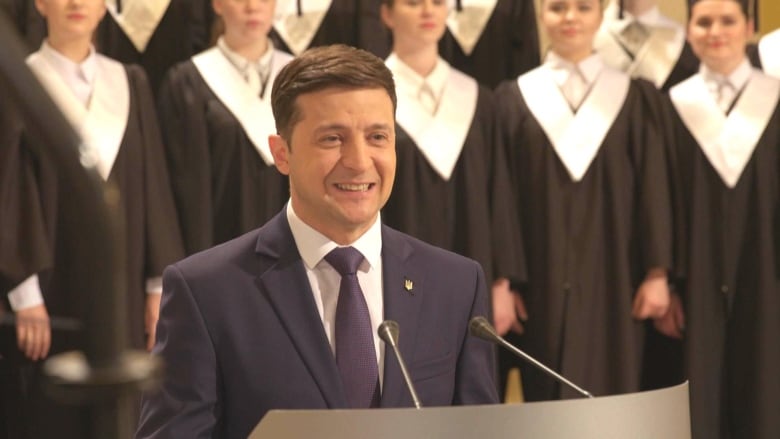 While Zelensky has surrounded himself with a team of political veterans, his campaign has been anything but orthodox.

He has largely let his TV persona communicate to voters about his platform and ideals. He has also shunned large political rallies and granted few interviews. Instead, he has waged his campaign on Instagram, YouTube and through appearances at his own comedy shows, where he mocks and ridicules his competition.

“Why Zelensky?” pondered 41-year-old IT worker Kostiantyn Didkovskyi, when approached by CBC in Kyiv.

“I can say I don’t see any alternative. Our country has reached the limit. It feels like there’s no other way,” he said in reference to the deeply embedded culture of corruption in Ukraine.

“I’m sure [his team] will make this victory not for themselves but for the country. He’s the only one who thinks about the country, not himself.”

Earlier this week, Berlin-based Transparency International, a watchdog group that monitors global corruption, called the situation in Ukraine “grim.”  It noted that last year, the head of one of Ukraine’s anti-corruption agencies was caught up in a scandal over trying to tip off some of the very people his agency was investigating. 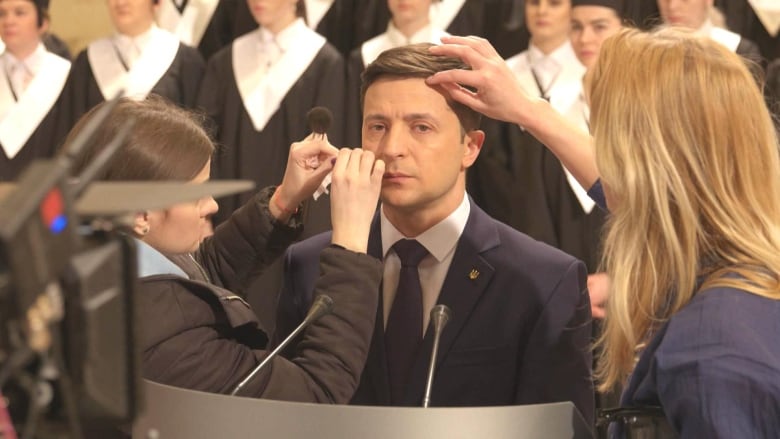 Zelensky gets made up on the set of hit TV show Servant of the People. (CBC)

Incumbent President Petro Poroshenko, who’s running for a second term, has been hobbled by near-continuous revelations about dodgy procurement and government contracts involving him and his family members.

His longtime rival and two-time former prime minister, Yulia Tymoshenko, who served time in jail on corruption charges, is also running for president.

There’s a powerful belief here that Ukraine’s economic progress has been hobbled by the country’s elite, who enrich themselves at the expense of everyone else. 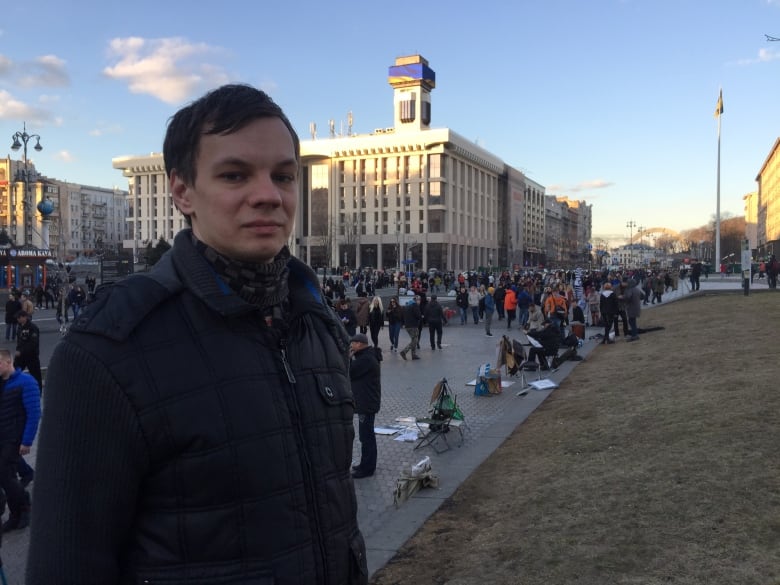 He said there have been significant reforms under Poroshenko but many Ukrainians remain unconvinced the changes are meaningful.

“Unfortunately, the anti-corruption institutions that were established with the will of the West are not functioning as well as they should,” said Fedorenko.

“On the one hand, there have been many high-profile [court] cases about corruption, but on the other it has been impossible to get anyone in prison.”

Ukraine is geographically and politically at the nexus between Europe and Russia, and its political choices carry a disproportionate significance for its neighbours — and its many Western supporters, including Canada.

“Its critically important,” Fedorenko said of NATO’s ongoing support for Ukraine militarily and for the other democracy- building activities that NATO members are contributing to.

“Supplies [and support] from Canada and the United States are of critical importance.”

Canada’s military also recently extended its training mission in the country’s west. As part of NATO, Canadian trainers have helped thousands of Ukrainian soldiers upgrade their skills and combat readiness. 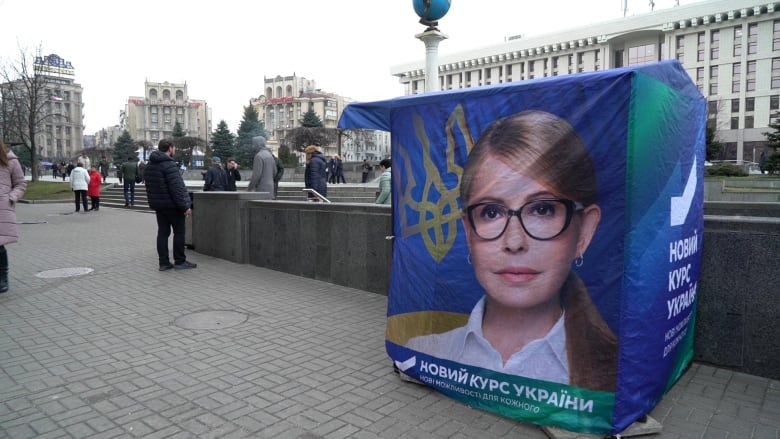 In many ways, this election is a referendum on how far Poroshenko has been able to take Ukraine since the dramatic events of 2014.

The Maidan uprisings saw the overthrow of pro-Russia president Viktor Yanukovych and a dramatic swing away from Russian influence. Russia responded with its annexation of the Crimean peninsula and began fuelling a separatist insurgency in Ukraine’s eastern provinces of Donetsk and Lugansk.

Canada is among the many countries that responded with political and economic sanctions against Russia, measures that have gradually been increased over time.

‘Do not expect us to give up’

In spite of Poroshenko’s troubled tenure, he’s been able to point to leadership against Russian aggression as one of his positives.

“Mr Putin, do not expect us to give up,” he told a fired-up election rally at the campaign’s mid-point.

CBC’s Chris Brown reports from Kyiv, as voting gets underway in Ukraine’s presidential election. It’s the first test of the war-torn country’s democracy since the so-called “Revolution of Dignity” five years ago. Observers from 18 countries, including Canada, are monitoring the fairness of the election. 1:24

While fighting in eastern Ukraine continues — with 11,000 dead and counting — Poroshenko said he has succeeded in solidifying Ukraine’s military position and has made full NATO membership one of his medium-term goals.

Zelensky, on the other hand, has downplayed his lack of experience, and demurred on any suggestion that he’s not qualified to take on Russia’s president. 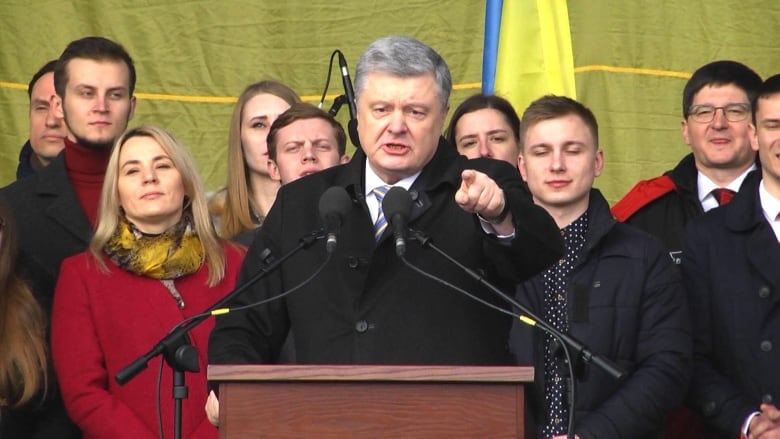 Ukrainian President Petro Poroshenko holds a rally in Kyiv. He said he is the only Ukrainian leader who can stand up to Russia’s Vladimir Putin. (CBC)

“I don’t need that kind of experience,” he said in a brief conversation with Radio-Canada.

“I think all I need is to be a decent person and have the professional experience of a [business] manager.”

“Many of Zelensky’s voters are protest voters — and kind of similar to Trump voters in that [the U.S. president] represents an anti-establishment alternative for the people.”

For all of Zelensky’s pretense about being an ordinary man of the people, critics accuse him of being backed by money from oligarch Ihor Kolomoisky, who owns the TV station that broadcasts his show.

Ukrainian social media posts are full of speculation from people who believe Kolomoisky will be exercising the real power behind the scenes if Zelensky wins.

Tymoshenko draws much of her support from older Ukrainians and is dangling a bump in pensions as part of her campaign. Her rivalry with Poroshenko dates back decades and she’s accused him of waging a campaign of dirty tricks against her.

Those accusations include that Poroshenko has tried to sabotage her campaign by running a candidate with a similar name as hers so as to create confusion on the official voting paper.

Although a total of 39 candidates will be on the ballot Sunday — a record-breaking number — the final hours of the contest will likely focus on the fight between Poroshenko and Tymoshenko for second place. 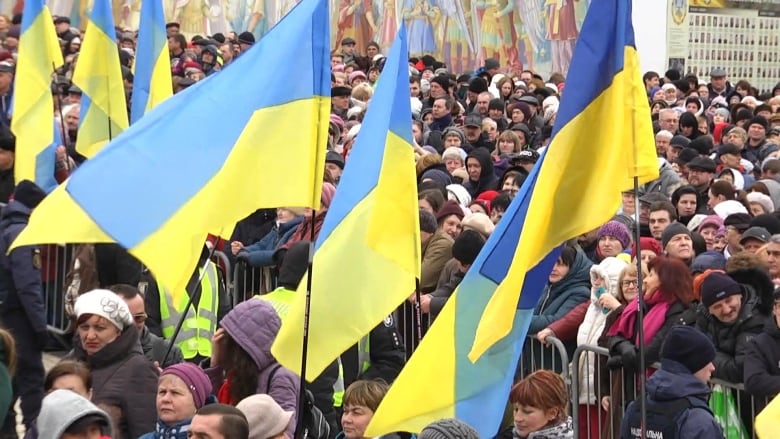 If no candidate gets 50 per cent of the vote in Sunday’s Ukrainian election, a run-off vote will be held April 21. (Pascal Dumont/CBC)

If no candidate gets 50 per cent of the vote on Sunday, then the top two finishers will go on to a run-off ballot on April 21.

For all the smears and accusations, the fact that a post-Soviet state such as Ukraine is even having a competitive election is significant.