A few months ago, having lunch with my old Vogue colleague Ginnie Chadwyck-Healey, I asked where her pale green shirt was from.

It was a perfectly ordinary cotton shirt but it was the way Ginnie wore it, with low-rise white jeans and the cuffs rolled just so, that made it so desirable.

She told me it was from Zara, and when I left the restaurant I immediately charged into the store to scoop up a blue version for myself.

The Gucci blouse worn back to front: Earlier this month, Kate attended the Henry Fawcett Children’s Centre wearing arguably her most stylish outfit yet: a purple Gucci blouse, with navy wide-leg trousers – unusual for someone who usually favours dresses in a formal setting and skinny jeans for casual events. You might spot the designer blouse is actually worn back to front – not a fashion faux pas, but most likely a smart styling move by Ginnie. Her accessories have stepped up a gear too, from clutches to top-handled bags – like this Aspinal Midi Mayfair bag, £495

So it is absolutely no surprise to learn that Ginnie is now helping her old university friend, the Duchess of Cambridge, with her wardrobe.

She is the perfect person for the job – as you can see from the results.

Her skill was in translating fashion information for real people rather than edgy fashion shoots.

You can see how all of this would be invaluable to the Duchess, whose every hiking boot and clutch bag is analysed and scrutinised.

While Catherine has a very distinct sense of her own style, she is not interested in spending hours poring over fashion pages and reading designer profiles.

Her stylist will be responsible for sourcing clothes for her to choose from, trying to balance the tried and tested with the new and trendy and making sure that her wardrobe can cope with an ever-growing list of public engagements – as well as making those all-important tweaks that can make the old look new.

To this end we have already seen the Duchess in slightly more fashion forward styles in recent months, demonstrating a new confidence in playing with her clothes.

Bardot neck becomes a bang-up-to-date square: Kate has long been an advocate of re-wearing items from her Royal wardrobe, but instead of simply slipping back into this elegant Alexander McQueen gown (worn last at the 2017 Bafta Awards, left) the Duchess, or perhaps her savvy stylist, had it reworked, taking it from the off-the-shoulder Bardot neckline popular a few years ago and replacing it with the short sleeves and square neck (right) seen all over the 2019 spring/summer catwalks

This may partially be thanks to Ginnie, but might also be the result of having seen her sister-in-law, the Duchess of Sussex, seemingly less hidebound by established Royal style and definitely not feeling the need to court favourable public opinion by dressing inexpensively.

While Catherine is not remotely interested in being a clothes horse, she knows that it’s a huge part of the job and will want to be seen as being at the top of her game.

Ginnie, like the Duchess, has young children but, unlike the Duchess, works full-time. She and her husband left London to bring up their two daughters in the countryside, but that didn’t slow her down professionally.

She is an ambassador of Smart Works, the charity – where Meghan is the new Royal Patron – which cleverly helps less privileged women get jobs through mentoring and dressing them for interviews.

Sloaney knits and boots get nipped in and laced up: Kate tends to rely on Breton tops for less formal events, but for a dressed-down visit a fortnight ago (left), she chose a knitted top from J.Crew (a fashion-insider favourite) instead. And worn with these Chloé lace-up boots (£360), instead of conservative flats or wedges, she is certainly making a style statement. In fact, attending a similar Scout event back in 2016 (right), the Duchess of Cambridge sported the same sweater, jean and flat boot formula. But with a few noticeable differences: she’s since swapped muted, oversized knitwear for slim-fit alternatives, and long riding boots for fashion’s favourite thick-soled hiking boots. It’s these small but considered new additions that elevate Kate’s otherwise casual outfits into something far more chic and current

Ginnie also runs her own successful styling consultancy, VCHStyle, which has at its core an understanding of how real women of different shapes and ages can make the best of themselves.

Her own taste is bright and cheerful, mixing in a bit of boho – embroidered smocks and ethnic fabrics – with clean, classic shapes such as shirt dresses, slim trousers and kitten heels.

She is no stranger to society weddings and racetrack meetings in her own life, but shops for herself on a tight budget which involves a lot of High Street and the odd investment splurge.

From formal dresser to sheer movie star magic: Then there’s her recent Baftas appearance. We’ve seen Kate experiment on the red carpet before when it comes to colour, shape and embellishment, but there’s something about this Grecian-style Alexander McQueen look that feels impossibly glamorous for a Royal – and suggests there may be a new power behind the wardrobe. Note the appliqué flowers on the shoulder and the gathered detailing which expertly defines her slender frame. Gone is her signature bouncy blow dry. Instead, Kate’s hair was loosely pulled back into a tousled bun, no doubt to accentuate the beautiful one-shouldered design – the kind of advice that good stylists just know how to give

A cape to replace the coat dress: DURING a walkabout in Northern Ireland, the Duchess of Cambridge wore a £1,735, fashion-forward coat from Mulberry. Rather than her usual choice of formal coat dresses in autumnal hues or tartans, this cape-style coat felt fresh and modern. It nods to fashion’s must-have pastel trend, in a soft powder blue. Accessories are low-key to offset the coat’s directional silhouette – typical of Ginnie’s wearable styling

I would expect her to introduce some new names to the Duchess’s repertoire, or encourage her to bring some of those she has in her private wardrobe on to the public stage.

What’s for sure is that Ginnie, with her easy manner, big smile, natural discretion and wealth of experience is a real pro rather than a limelight seeking amateur. The Duchess couldn’t find herself in better hands.

Got a grip on the fashion insiders’ latest It bag: While this look, right, feels more in keeping with Kate’s former wardrobe, one item stands out. In Blackpool earlier this month, the Duchess completed her emerald outfit with a box bag by Manu Atelier which costs £408. Lesserknown than most of Kate’s favoured accessory brands, Manu Atelier is a mid-priced handbag label created by two Turkish sisters, which is currently favoured by fashion editors and social media influencers alike 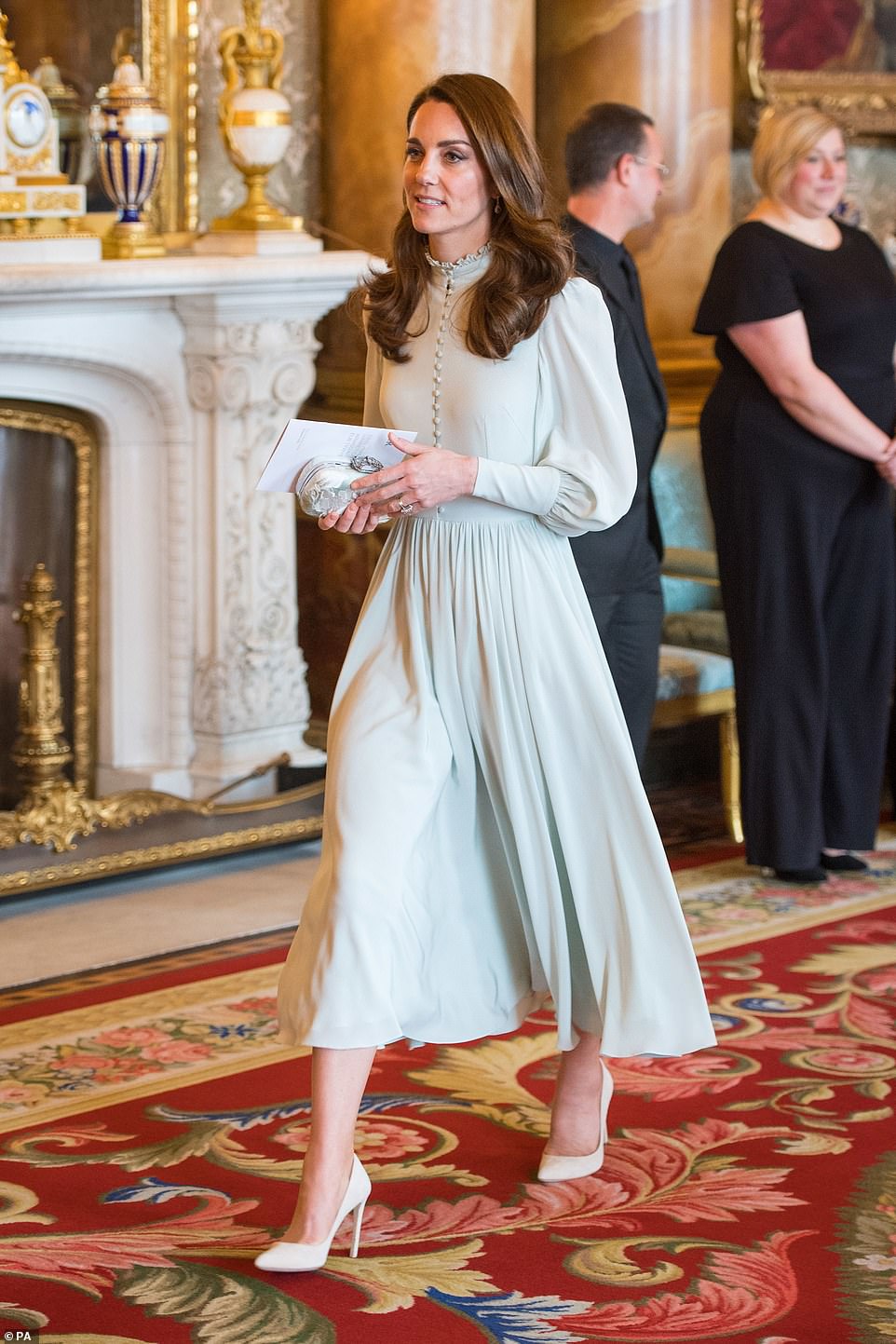 Modest chic with white-hot heels: Modest silhouettes are trending – think high necklines, full-length balloon-shaped sleeves and hemlines that fall below the knee. And while this beautiful frock, reportedly created by a private dressmaker, could perhaps be a coincidental wardrobe choice, we’re betting this was in fact an expert move by Ginnie. She may have also been behind Kate’s decision to embrace one of this season’s most popular footwear trends – white high heels