Ahead of Tuesday’s U.S. midterm elections, he had a simple message for the sleepy students who answered: get out and vote.

The 18-year-old survived the Valentine’s Day mass shooting at a Parkland, Fla., high school, which killed 17 students and staff members after a former student opened fire.

“People act like you’re just supposed to move on from this. No, you can’t move on from something that never should have happened,” Hogg told CBC Radio’s The Current.

Following the massacre, he went on to co-found the #NeverAgain movement, which led massive March for Our Lives youth protests to press for gun control. 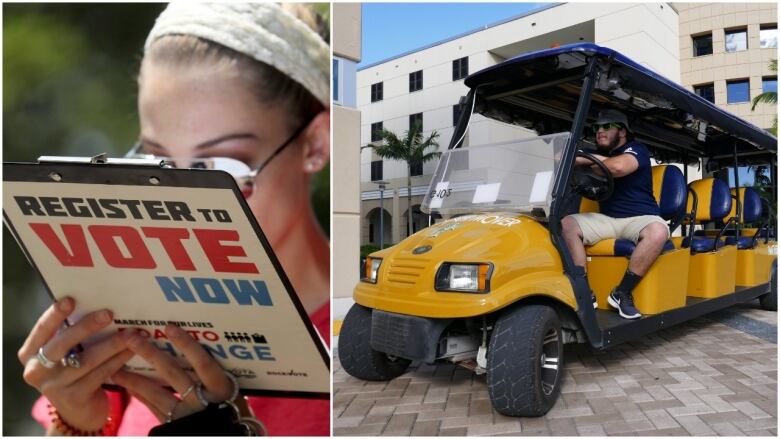 Chloe Weiland registers to vote in Tallahassee, Fla., in July 2018, during the Vote for our Lives tour. At an event at Florida International University on Oct. 26, students were ferried to the voting booth in the ‘ballot bus.’ (Mike Stocker/South Florida Sun-Sentinel via AP; Julie Crysler/CBC)

Since June, survivors of the Florida school shooting have embarked on the Vote for Our Lives tour, making over 100 stops in 25 states. The tour aims to get young people registered to vote and “elect morally just leaders who will help us end gun violence in the U.S.,” according to its website.

“For some people it took them to see their best friend in a casket before they started voting. It shouldn’t take that,” Hogg said.

“Whatever our generation wants can easily happen within the next 10 years, if we just vote.” It’s unclear, however, whether the movement will have any discernable impact on youth voting.

David Hogg and Emma Gonzalez, centre, at the Florida International University campus on Oct. 27, where they encouraged young people to vote. (Julie Crysler/CBC)

An online poll conducted in early October by the Institute of Politics at Harvard’s Kennedy School of Government suggested 18 to 29-year-olds are “significantly more likely” to vote in the upcoming midterm elections compared to 2010 and 2014. Forty per cent of the 2,003 survey respondents said they will “definitely vote” Tuesday.

Meanwhile in 2014, 19.9 per cent of voters aged 18 to 29 cast a ballot in the midterm elections, according to the Center for Information and Research on Civic Learning and Engagement, which characterized it as the “lowest rate of youth turnout recorded in the in the past 40 years.”

“Young people have to have that issue; that candidate that really drives them out to vote,” said Kathryn DePalo, a university instructor at FIU’s department of politics and international relations.

“Certainly, I think this election qualifies.” Gonzalez is one of the founders of the March for Our Lives movement. (Julie Crysler/CBC)

The 18-year-old activist talks to Julie Crysler about what it takes to keep fighting for what she believes in. 1:09

#NeverAgain youth ‘in this for followers and fame’ 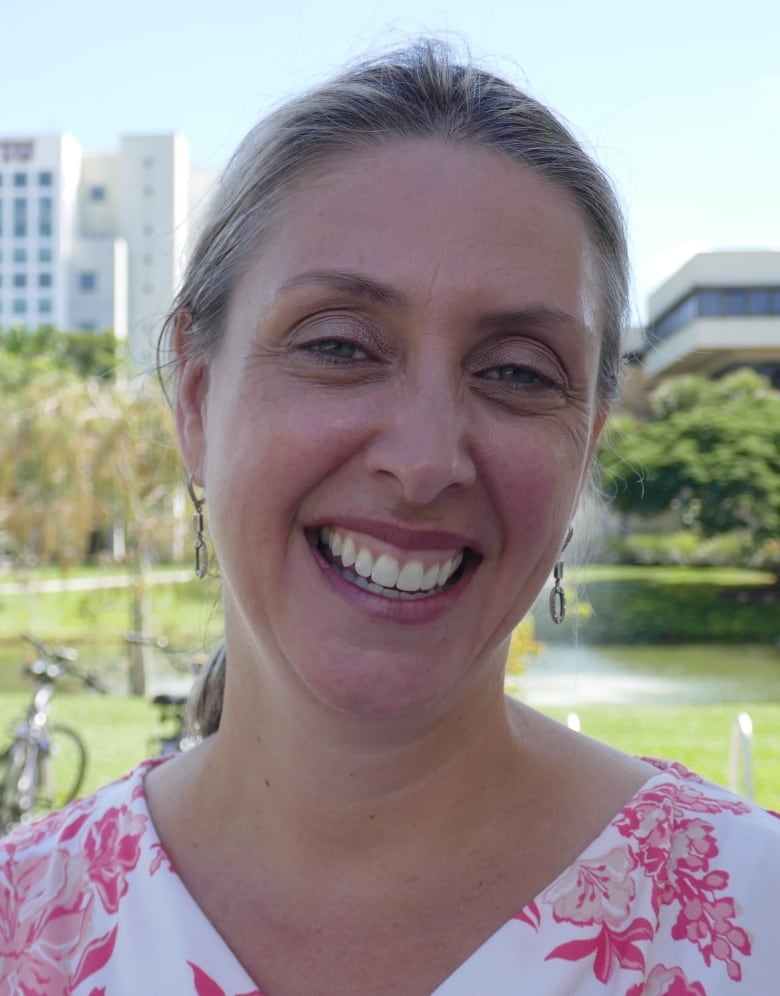 Young people need to feel inspired by an issue or a candidate to vote, said Kathryn DePalo, an instructor at FIU. (Julie Crysler/CBC)

In the lead-up to the vote, Parkland students “have kept the gun control issue first and foremost in voters’ minds,” particularly in South Florida, DePalo said. However, public support for gun control — specifically for a ban on assault rifles — has waned since the school shooting, polling data suggests.

In March, Florida Gov. Rick Scott signed gun-safety measures into law, which raised the minimum age to buy rifles from 18 to 21, imposed a waiting period on gun purchases and allowed some school personnel to be armed. The National Rifle Association, a pro-gun lobby group, filed a federal lawsuit, arguing that the measures violate the Second Amendment. That action is ongoing.

Hunter Pollack, whose 18-year-old sister was killed in the Parkland shooting, worked to get the measures passed, but he doesn’t think the #NeverAgain campaign deserves any credit.

“They weren’t in Tallahassee with us when we got the bill passed,” said the 21-year-old political science student, who spoke to The Current at a rally for Republican candidate Ron DeSantis. Hunter Pollack lost his sister Meadow in the Parkland shooting. He has since become a campaigner for school safety measures. (Julie Crysler/CBC)

After the Parkland shooting, Pollack became an advocate for increased safety measures in schools rather than the gun control called for by #NeverAgain.

“We need more spending on mental health and we need good manpower — we need to teach our security guards, to teach our teachers, properly what to do in an active shooter situation.” 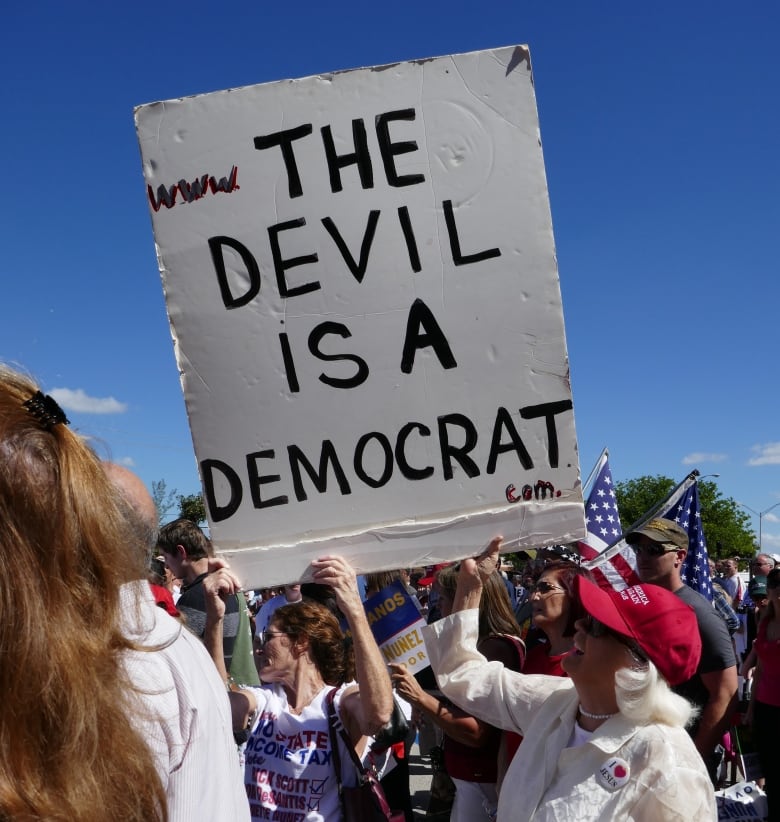 The #NeverAgain movement is a distraction from achieving those goals, he said.

“I actually despise what they’re doing,” he added.

I just hope people listen to each other because I think, in the end, we’re asking for the same thing.– Julie Pollack

Pollack’s mother, Julie Pollack, said that gun control is a polarizing issue, but people “should all be angry.”

“It’s unfair that after 20 years — with a lot of violence in the schools — that we’re not more careful with safety and security,” she said.

“I just hope people listen to each other because I think, in the end, we’re asking for the same thing. So I’d rather work together than against other people.”

‘One vote can change the whole entire government’

“Young people are seeing that their one vote can change the whole entire government.” 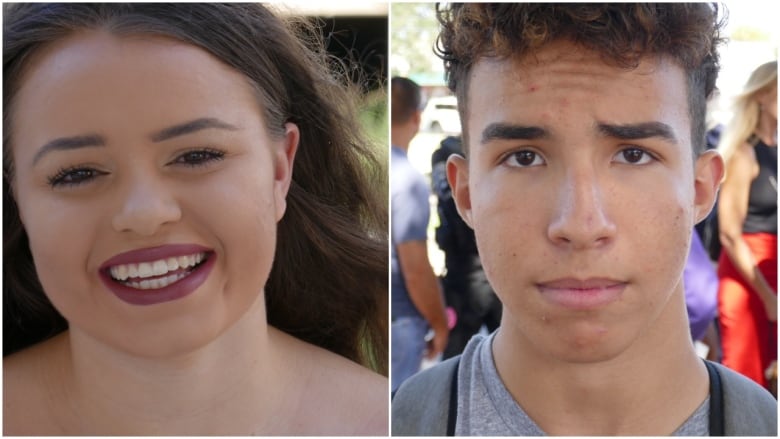 Gabriela Cabrera and Christian Rowell have different views on the March for Our Lives movement. (Julie Crysler/CBC)

The Current spoke to Cabrera at an early-voting event on the Vote for Our Lives tour in FIU, but not all of the young voters motivated by the Parkland shooting support the #NeverAgain movement.

“Many young people like myself don’t like the way that the March for Our Lives kids have represented the community,” said Christian Rowell, a 16-year-old student at Atlantic Technical College in Coconut Creek, Fla.

Rowell has been helping the Pollock campaign for Ron DeSantis, and spoke to The Current at a rally for the Republican candidate.

He praised the Vote for Our Lives’ drive to register young voters, but rejected their ideas on gun control and worried about the candidates they supported. 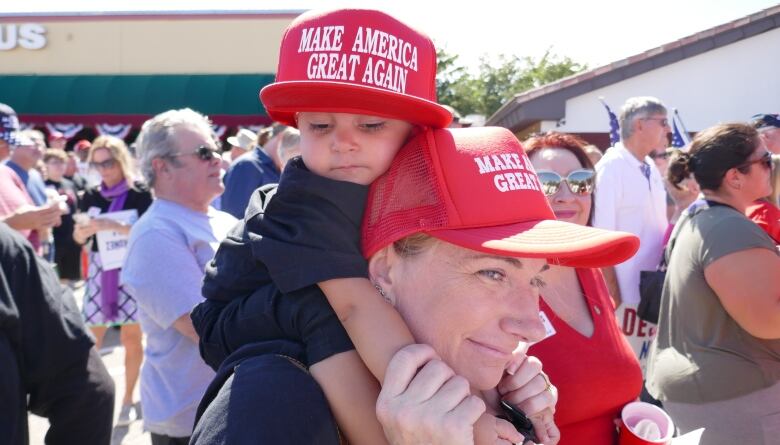 A future voter at a rally for Republican candidate Ron DeSantis, in Coral Springs, Fla., on Oct. 28. (Julie Crysler/CBC)

“We feel like the March for our Lives kids just don’t really elaborate on the candidates, and they don’t really shed light on what they’re going to do and the cons of these politicians they want to vote in.” 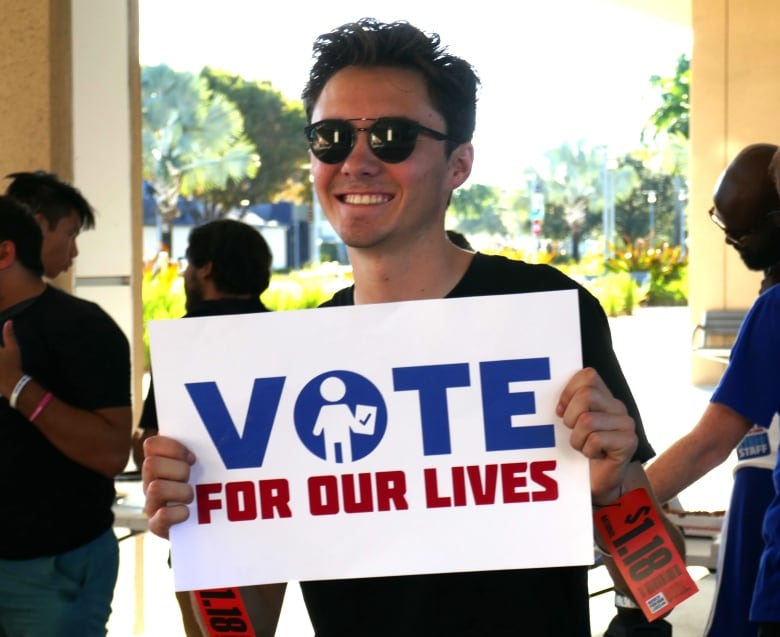 Hogg wants young voters to think through the full range of issues before they vote. (Julie Crysler/CBC)

Cameron Kasky, a founding member of #NeverAgain, grew “weary” of these deep divisions over politics and strategy. He left the group over the summer.

“I started looking around and I started seeing what people were calling each other and I said, ‘This is ridiculous. I can’t take part in this anymore.'”

Kasky and his father, Jeff Kasky, spoke with The Current in a crowded restaurant in Boca Raton, Fla., where several well-wishers came up to thank the 17-year-old for his activism.

When one woman told Kasky she followed him on Twitter, he joked; “I’m so sorry.” 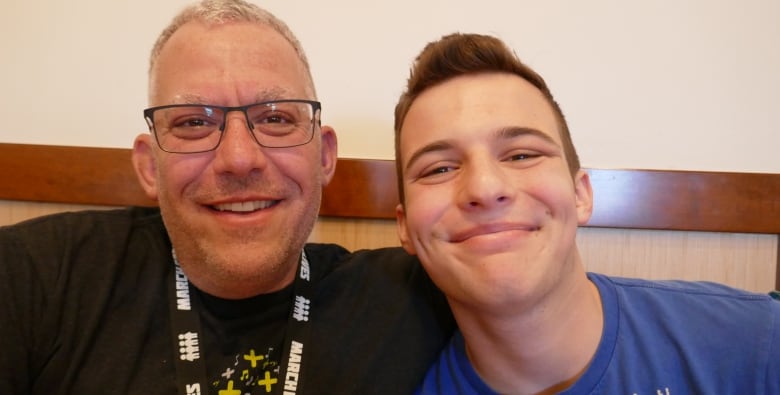 Cameron Kasky, pictured with his father Jeff, was a founding member of the #NeverAgain movement. He left after his views on how to debate the gun violence issue shifted. (Julie Crysler/CBC)

While still an advocate for gun control, his viewpoint has shifted in the months since he survived the Parkland shooting.

But after meeting gun owners, he realized they were not “people who shrug off school shootings,” but people with different ideas on how to prevent them.

“We all need to realize that everybody in this country wants pretty similar things, including safety and prosperity for everybody in it.

“You can buy into any narrative you want — that folks who don’t believe in gun control are evil bloody hacks — but that’s just garbage.”

For comparison purposes only, a probability sample of the same size for the Institute of Politics’ online poll on youth voter intentions would yield a margin of error of 3.18 percentage points, 19 times out of 20.

Written by Padraig Moran. The Current’s coverage in Florida was produced by Julie Crysler.